The store will not work correctly in the case when cookies are disabled.
CURRENT UKGC PRODUCTION, STOCK & DELIVERY STATUS
Menu
Account
The Rise of AMD

The Rise of AMD

The story of Advanced Micro Devices, Inc. - otherwise known as AMD - began with its founding in 1969, just a year after that of its long-time rival, Intel (1968). Founded at a time when the advent of computers were on the horizon and set to change the world forever, these two companies have both had a large say in the development of graphical processing power in the years since.

Ask the average person which of these brands they've heard of, though, and there's no doubt that you'll hear Intel 99% of the time. This can be attributed partially to the success of greater branding and marketing, perhaps, but there has been no question over the quality of their products either. Many powerful PCs today function optimally on Intel Graphics Technology. But they've been driven to this level of quality by knowing their nearest rival was right on their heels, and in recent years AMD have been seriously threatening to overtake them for the first time. 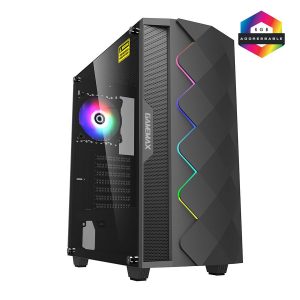 Their secret lies in the new Ryzen processor, which first launched in 2017 alongside a microarchitecture codenamed 'Zen'. This new series of processors quickly went on to become a well-regarded stable component for new desktop and mobile devices, servers and other embedded platforms. While AMD once started on the back foot against its main competitor (Intel created the first microprocessor in 1971; AMD didn't enter this market until four years later), Ryzen represented an opportunity to catch opponents off-guard and steal a sizeable share of the market. They appear to have seized upon that chance.

Its success is twofold; it is a brilliant processor capable of delivering on the expectations of demanding consumers via powerful AMD gaming PCs. However, it's also sold at a cheaper price while managing to function just as well as more expensive counterparts. In a short space of time, many have come to consider Ryzen-powered products among the more consumer friendly in the market for this reason.

This hasn't been a sudden surprising change, of course, but rather a culmination of promising signs in the years prior to Ryzen's emergence. It is a semi-custom AMD chip based on Jaguar microarchitecture that was included in both PlayStation 4 and Xbox One hardware, while their Zen 2

processor is also now used in PS5 and Xbox Series X/S. These relationships should build trust among consumers that their processing chips are top quality, capable of powering a range of strong AMD gaming PCs that can even surpass graphical achievements on brand new consoles.

As with any component though, a processor is only as strong as the build surrounding it. To be sure you're getting a quality custom PC, consider checking out UK Gaming Computers, who have a wide range of GPUs and other parts in stock to build some of the best value Ryzen-powered AMD gaming PCs around. They'll answer any questions you have about the ideal build for your specific needs and budget.