The store will not work correctly in the case when cookies are disabled.
***IMPORTANT COVID-19 AND CURRENT ORDER INFORMATION***
Menu
Account
Coolermaster MasterLiquid Lite 120 Review

When we heard CoolerMaster had realised a water cooler with near identical specs to the H45 we just had to get our hands on it and put it through its paces. We previously tested the H45 against the H60, which can be found here! (http://www.ukgamingcomputers.co.uk/corsair-hydro-h45-review-a-89.html)

So this time round we are seeing if the MasterLiquid Lite 120 can outperform the H45 in a head to head cooling contest when using an i7 7700k at stock, 4.7GHz and 4.9GHz. 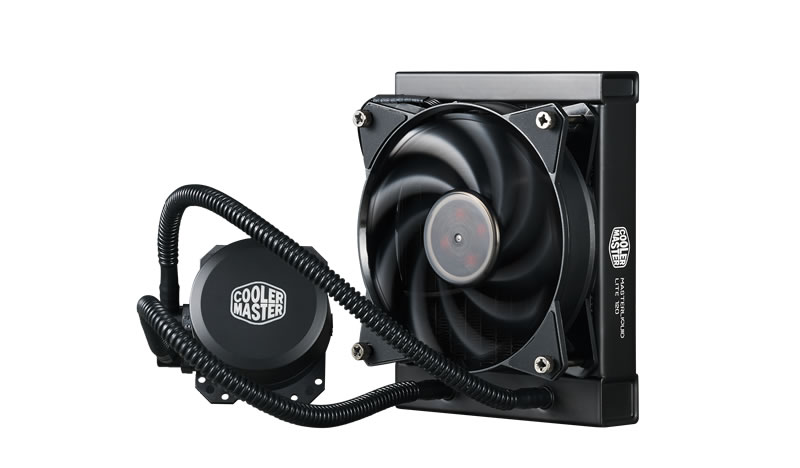 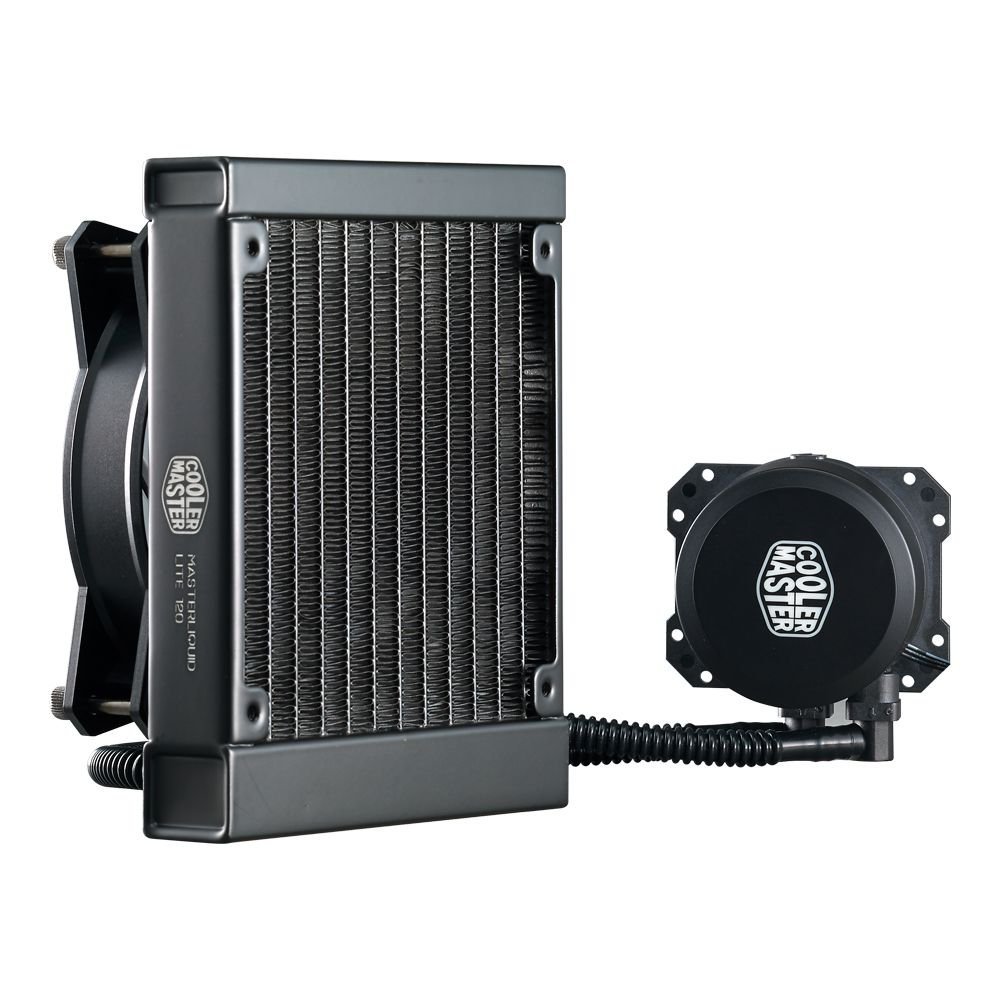 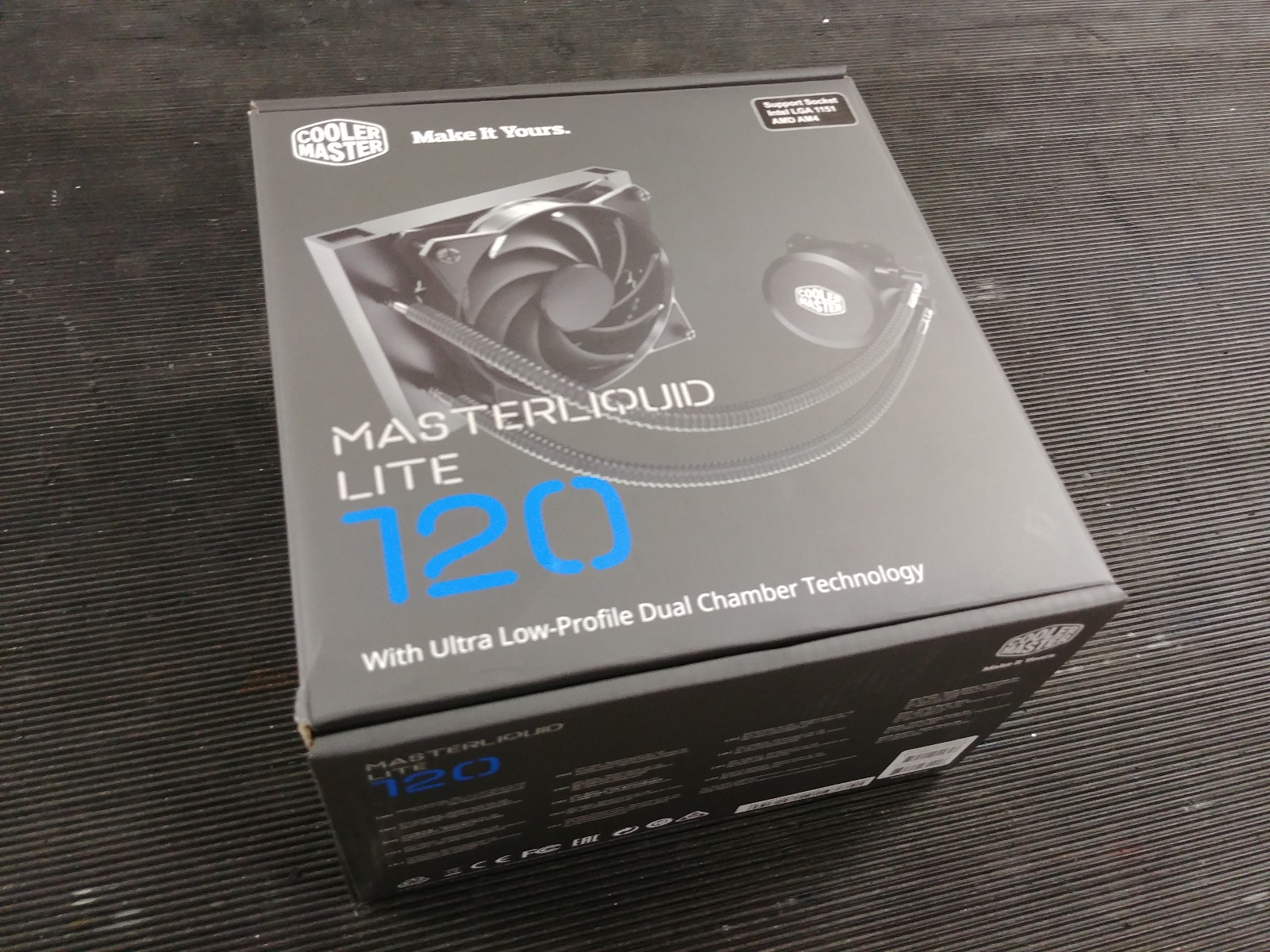 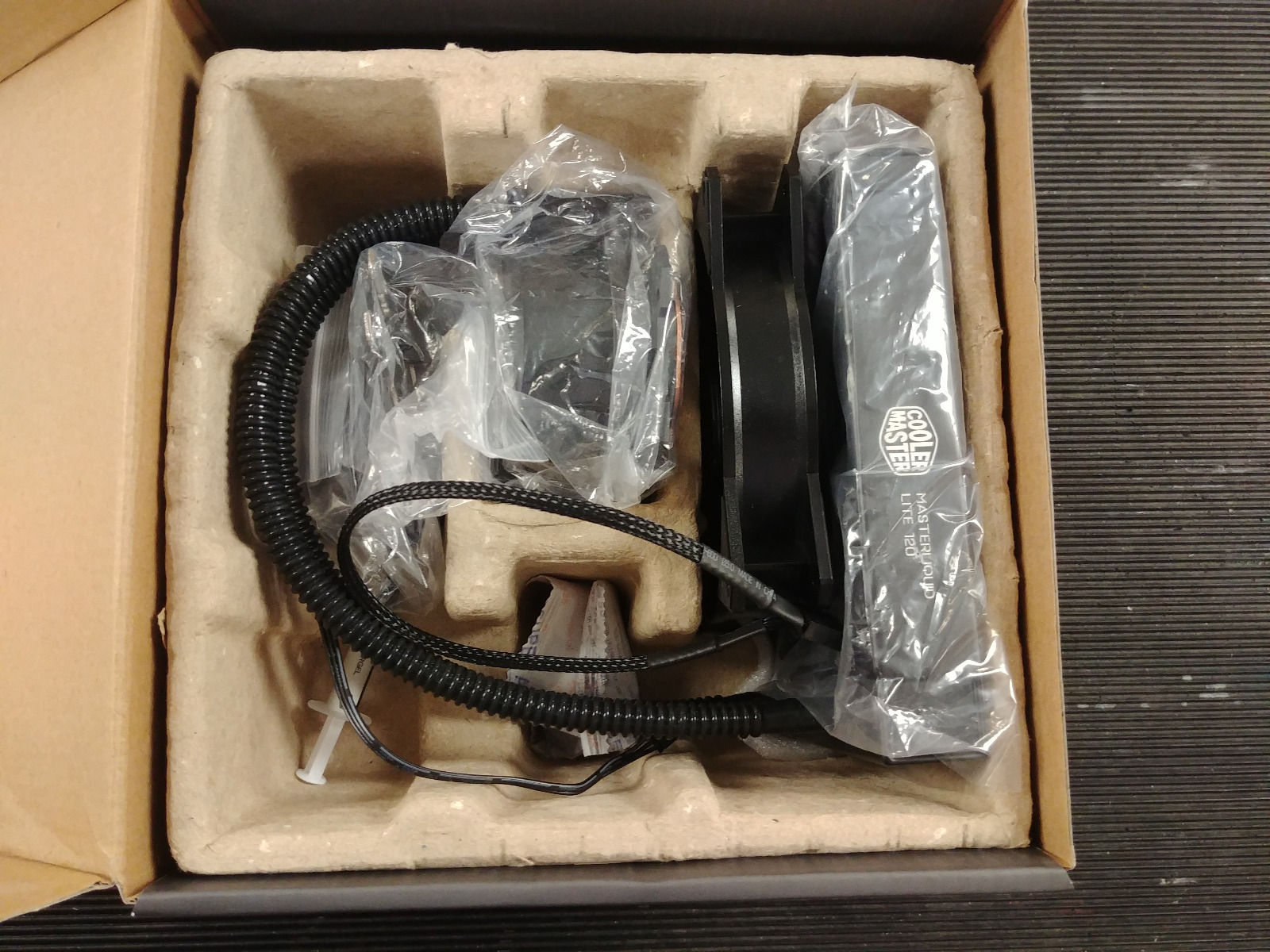 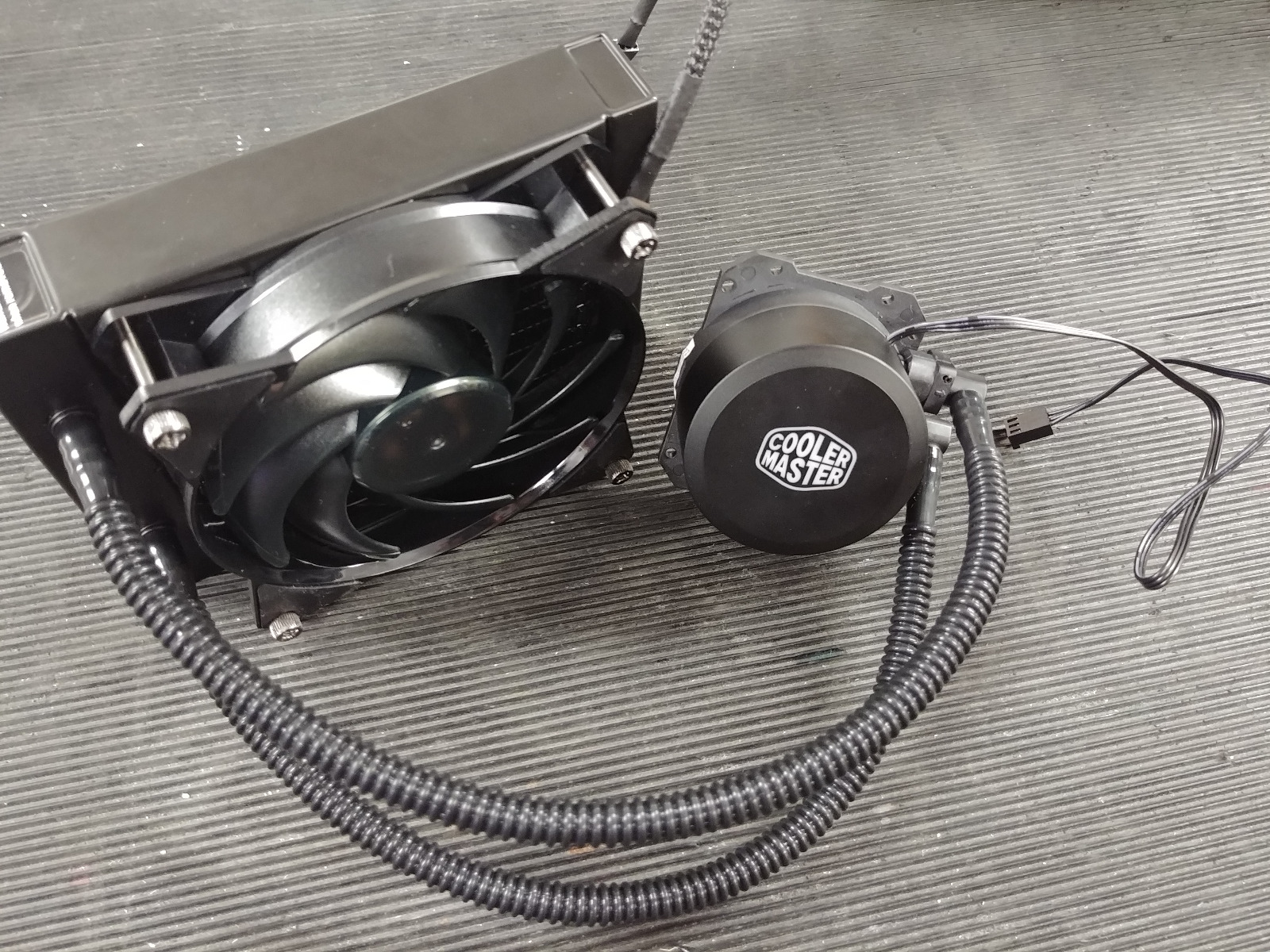 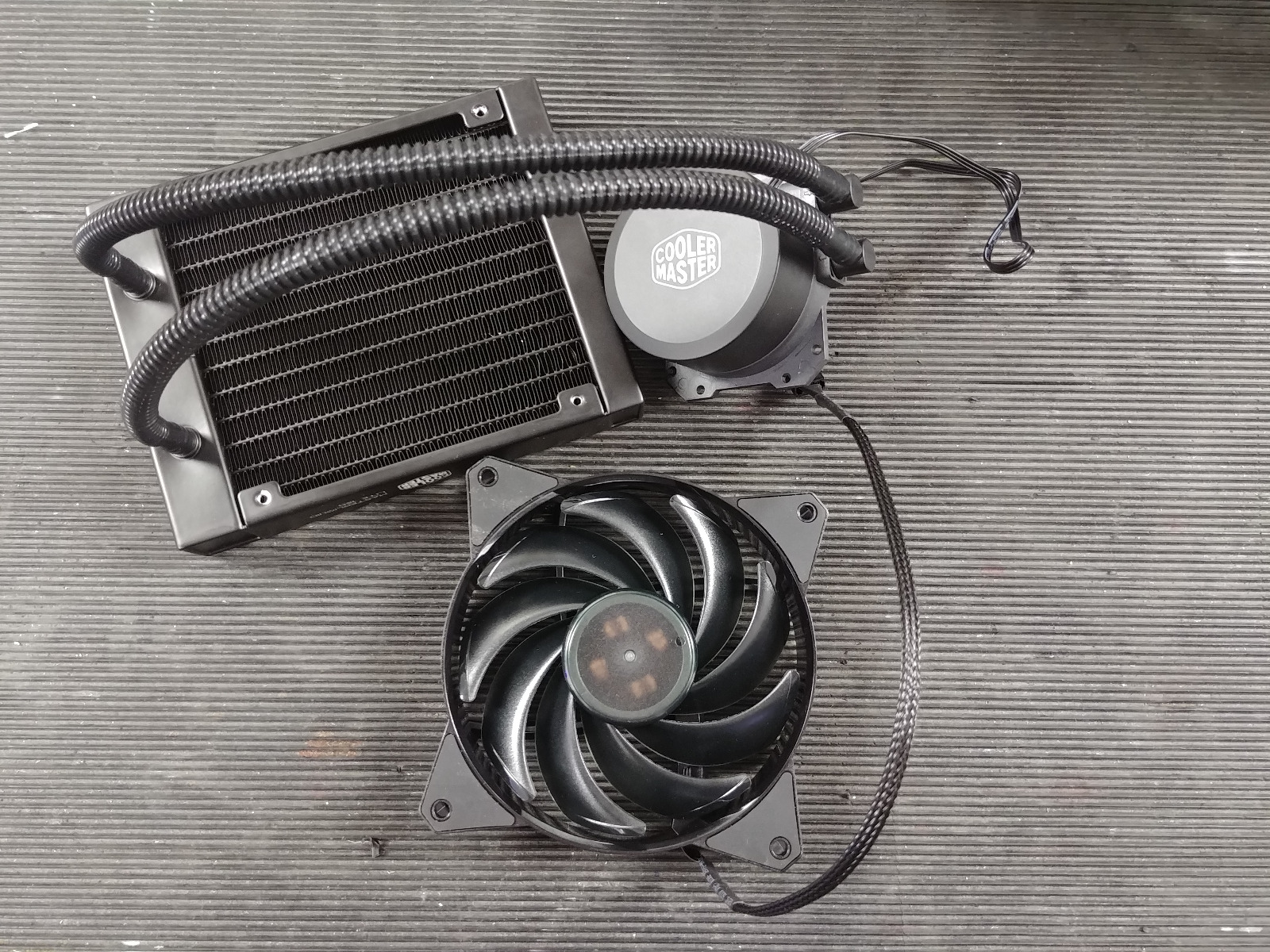 Installation of the MasterLiquid Lite 120 is a breeze when compared to the H45. Not that the H45 is extremely difficult to install, it just requires a little bit of finessed hand yoga.

I think this is due to the MasterLiquid Lite 120 having ever so slightly more flexible tubing which isn’t elasticated as much as the H45’s. This means it doesn’t ping out of the way when trying to mount the cooler. This makes it a much easier and quicker task to accomplish while still having a strong and reliable mounting method, making sure that sufficient contact is made between the block and the processor.

Corsair have their H45 for sale for typically £50, which for a cooler of its performance is a superb offering and anyone looking for a cheap entry into the world of watercooling will find this cooler to fit their needs perfectly without any hitches.

CoolerMaster have made their impressive little cooler available from anywhere between £37.99 and £44.99 depending where you get it from. If this unit can put the Corsair H45 through its paces this is an incredible price point coming in at approximately 10%-20% lower!

After setting this cooler up on our testing rig we ran it through its paces using Prime95, a very widely used CPU testing software that really test’s CPU’s mettle.

Our system had the following specifications: 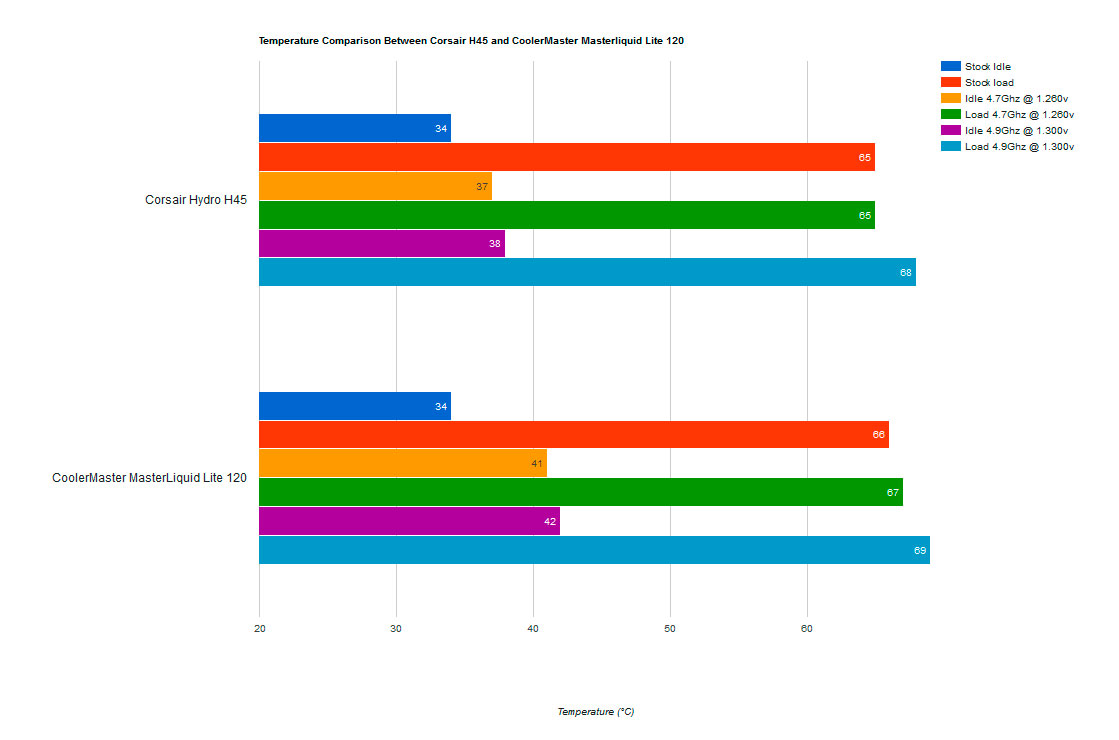 To fully test the cooling power of the MasterLiquid Lite 120 we decided to run 6 sets of tests on them.

Although the CoolerMaster fan pushes approximately 15% less air than the Corsair variant this does not seem to affect the cooling ability in any significant way. The maximum difference we had in temperatures between the two coolers was 6 degrees Celsius, proving that the MasterLiquid Lite 120 is up for a fight.

Another thing to note is the reduction in noise levels. The H45, while a very good cooler, is notoriously loud, this is where we are very impressed with the MasterLiquid Lite 120, it’s very quiet yet provides fantastic cooling capabilities in such a small form factor, meaning it can fit into small form factor cases and provide the necessary cooling power to get a nice overclock.

Overall we were immensely impressed with the MasterLiquid Lite 120 not only just as an AIO Water Cooler but especially for how cheap the unit is at RRP.

Cooler Master have been very excited to show this cooler off to reviewers and their potential new customers and it is easy to see why. The levels of performance they said it could achieve were almost unbelievable when they first announced this unit. But now we know first-hand how truly amazing this cooler is at what it does.

The method of keeping the pump on top of the block is a design choice I think that CoolerMaster put a lot of time debating whether to keep it there or not. We are glad with their decision as it not only keeps the unit smaller on the radiator side but also an overall cleaner aesthetic. Aesthetic is also now my next point; the radiator, the fan and pump/ block all look fantastic, very minimal design to keep a clean and concise look throughout the cooler. But… The tubing that has almost become synonymous with CoolerMaster AIO’s at this point is a design choice we wished and hoped that they would change. It’s, and this is the only way I can describe it, corrugated tubing. This look is very dated and does not fit in well with the rest of the cooler. However this is a very small setback in our books and it is only our opinion, the rest of the product is absolutely fantastic, especially (You’re probably getting bored of me mentioning this!) for the super low price point.