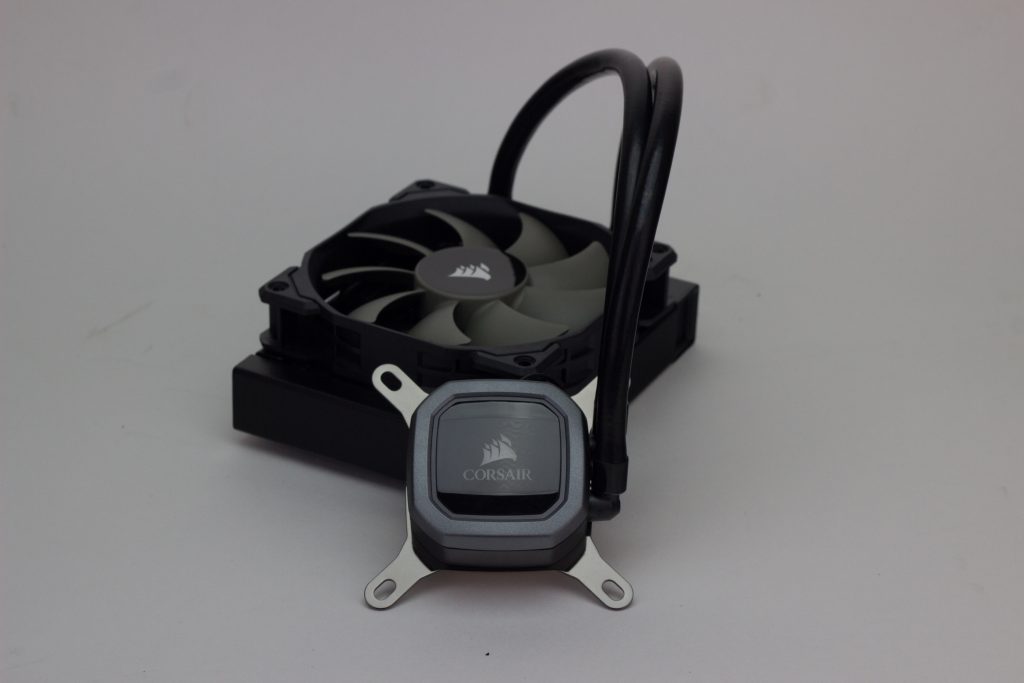 Corsair are back with another 120mm AIO, the H60. No, not the same H60 they released a few years ago, but a new one released just last year.

You might notice a few differences between the H60 and Corsair's other recently released coolers like the H150i Pro and the H115i Pro, one of them being the lack of the letter "i" in the product name, this is because that "i" indicates the Corsair Link compatibility that the H60 does not include, which we assume is another cost cutting measure. The lack of Corsair Link makes the H60 very very easy to use, all you need to do it make sure the pump is powered, and the fans is plugged in and that's it.

Another difference is that this cooler is not made by Asetek who make all of Corsair's other recent coolers, instead it is made by COOLIT which we suspect is most likely another cost cutting measure in order to keep Corsair's prices competitive against the ever growing list of companies entering the AIO market.

It is not a surprise that this unit uses an aluminium radiator and a copper cold-plate with an Ethylene Glycol based coolant to stop any sort of corrosion taking place, which is very common and almost all AIOs use this mixed metal and coolant setup.

We've talked about the price a fair bit in this introduction without actually mentioning the actual price, well it's MSRP is £74.99 as per Corsair's website but we have seen it as low as £59.99 from other retailers at the time of writing this review making it very competitive against the likes of CoolerMaster, EVGA and Antec who all have 120mm AIOs on the cheaper end of the market.

The mounting of the H60 is actually exactly the same as every other Corsair AIO, even though this one is made by COOLIT and not Asetek. It is very easy to install on all compatible sockets and can be done without tools.

You start by installing the backplate onto the board by positioning it then screwing in the four standoffs, this is now secured to the board and the CPU block is ready to be installed. Next you simply have to place the CPU block over the four standoff pegs and screw the CPU block down. The radiator is also very easy to install, the small end tanks mean that we did not experience any clearance issues with any case that supported a 240mm radiator and the tubing is very easy to maneuver into position without any kinks in the tubing. 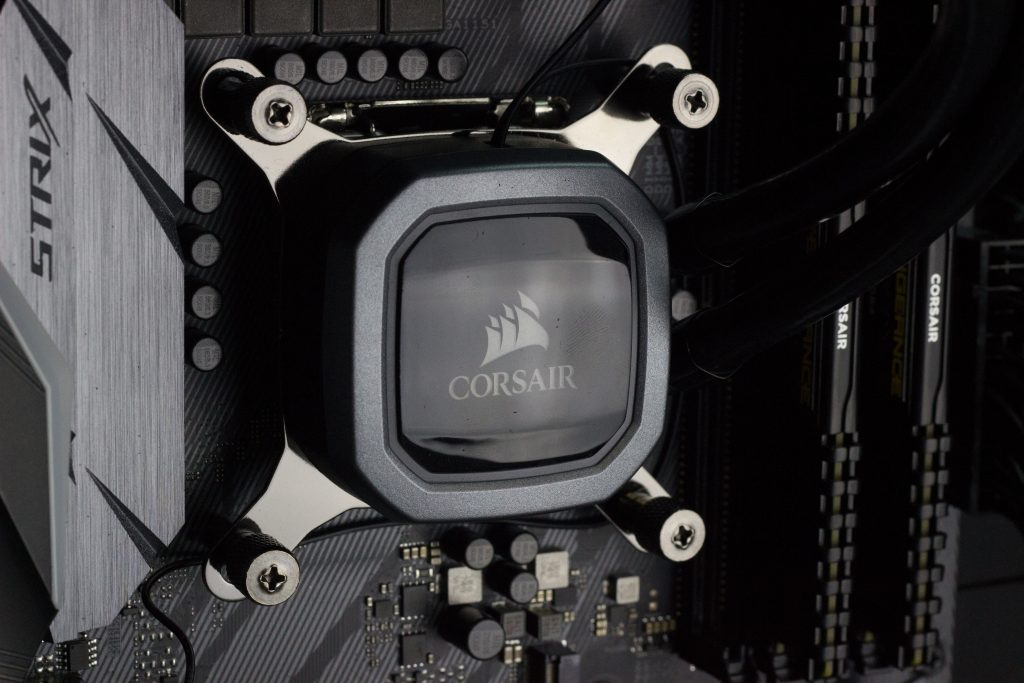 The aesthetics were not what Corsair were focusing on in the creation of this cooler, but it doesn't do a bad job of looking good. The main thing to talk about is the LED illumination that is on the CPU block, like the other Corsair AIOs this is not RGB but white instead, we'd guess this is a further cost saving measure but definitely not a bad choice as it still should go with any colour scheme.

Another great aesthetic feature is the braided tubes that look much better than the rubber tubing that is exposed on some older Corsair AIOs, this braiding also offers a level of protection to kinks in the tubing.

The CPU block also isn't as bulky as some previous generations of the H100 which means the tubing can exit out of the side instead of the top, which we think improves the aesthetic massively. We also did not encounter any RAM clearance issues with the tubing like this. 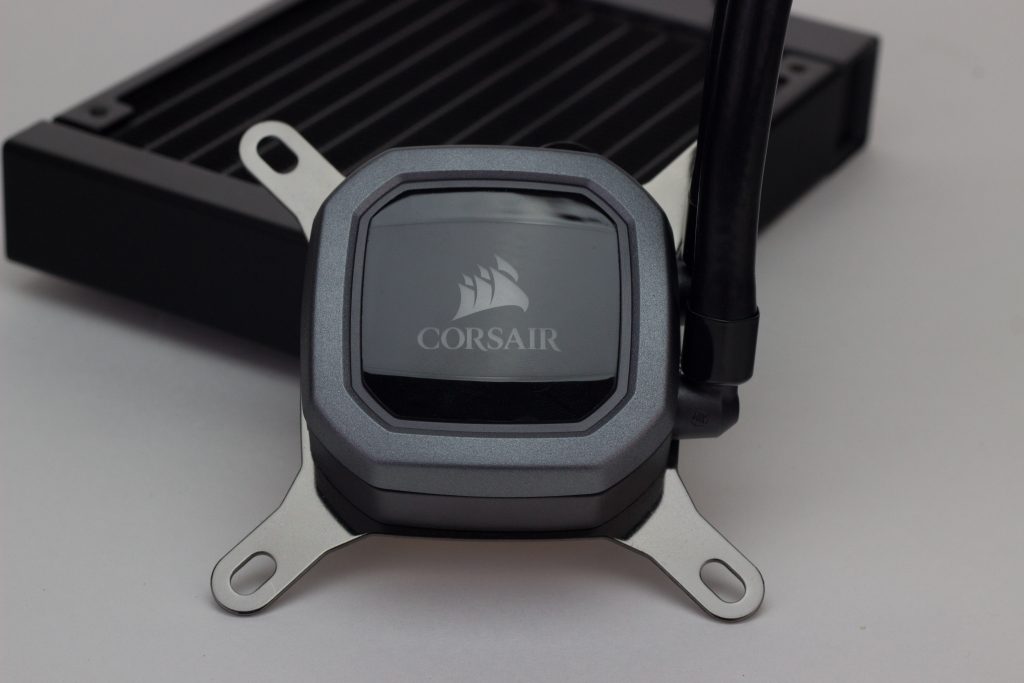 Now, we've mentioned that a lot of cost cutting measures have been put into this cooler in order to keep it on the cheaper side, but has this impacted performance too? Well, this is the performance section of the review so you're about to find out. 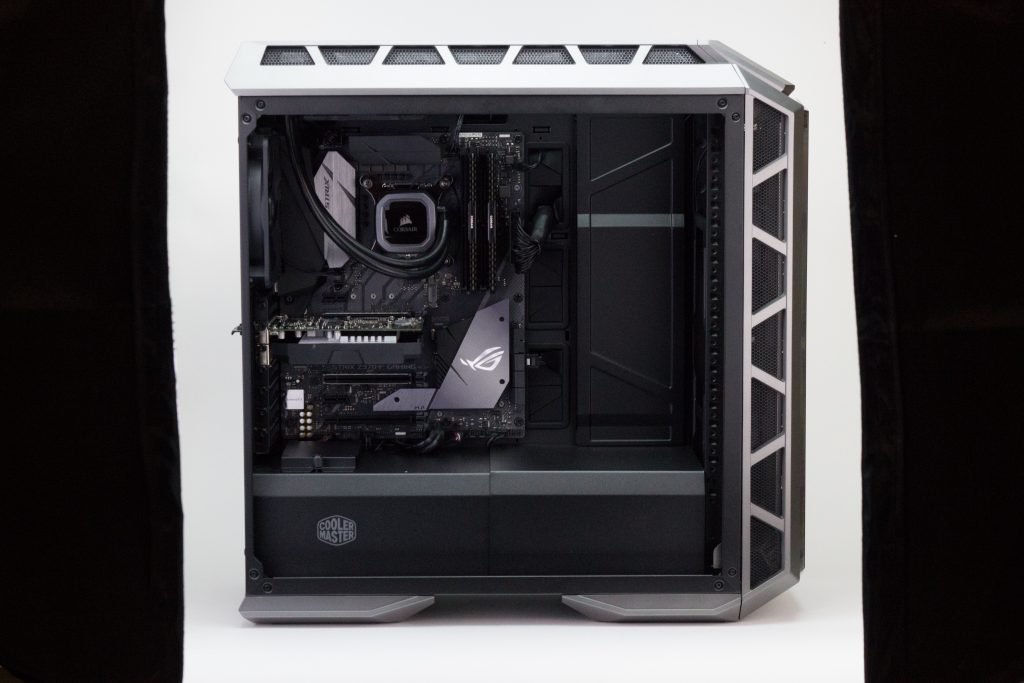 We used different pieces of software for our testing, to stress the CPU we used Prime95 with the Blend Preset, 3DMark Time Spy's CPU Test and Aida64 CPU+FPU, which is an AVX based load, to push the coolers as far as we could!

We ran the tests with the stock voltage and frequency settings, and also overclocked. The overclocked settings were 5.0GHz at 1.35v, these tests are marked "OC".

All tests were performed with a room temperature of 21°C. Fan speeds were determined by the default setting as controlled by the motherboard.

However it isn't all sunshine and rainbows as the noise levels were considerably higher than the other Corsair units, unfortunately we are unable to test this properly due to the inconsistent noise floor of our current testing environment. Most of this noise did seem to be coming from the SP series fans, which is one of the differences between this and the other Corsairs that sport the ML series fans. The fans are obviously the easiest fan to replace and I suspect if you threw a couple of ML120s or other equally quiet fans you'd have similar performance at similar noise levels.

This is a great little cooler, especially for under £60. It is definitely designed for people who don't care about all the fancy RGB and just want a cheap and reliable AIO that also performs well, and that is exactly what it delivers.

The only downside to it is the noise, which is a bit disappointing but I understand why Corsair have included the cheaper SP series fans instead of the fancy ML series.

- Fans get a bit loud when under heavy load

- Isn't as good looking as other options 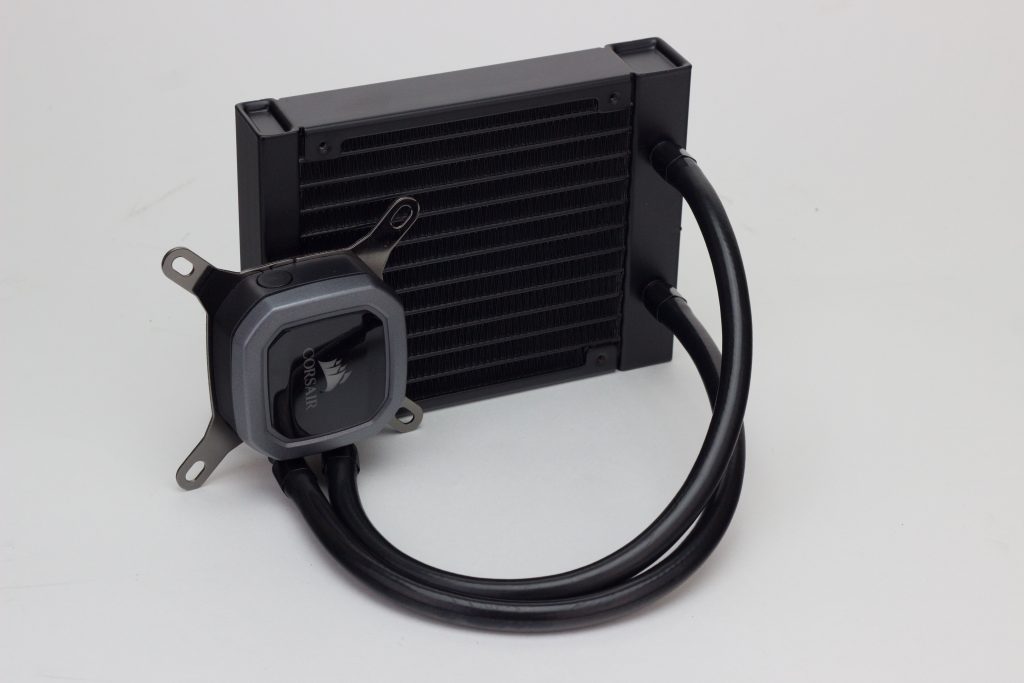