The store will not work correctly in the case when cookies are disabled.
***IMPORTANT BLACK FRIDAY, CHRISTMAS & COVID-19 ORDER INFORMATION***
Menu
Account
How to check an overclock amount

How to check an overclock amount

Understanding overclocking is not the simplest of things and understanding how far a Processor has been pushed can be a minefield of information. Thankfully, this short and sweet article will soon help you check the amount of overclock on a CPU.

Burn it! Twice! This is the biggest reason for the confusion as windows system information will usually pick a processor speed number at random and display it with most of the time it being the stock clock speeds. Ignore it, its lying!

One word, CPU-Z! CPU-Z exists because it offers the ability to look at every little piece of information related to your systems processor and is far more comprehensive than Windows system information or to be honest, any other piece of software out there.

Get it from: http://www.cpuid.com/softwares/cpu-z.html and install/run it (there are two versions - an installed version and a standalone version, which one you use is up to you as they both do the same). 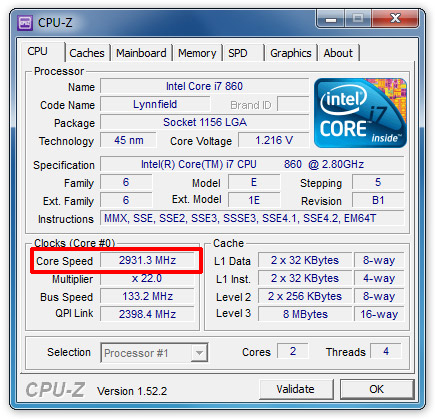 You will see a whole host of information, most of which will mean absolutely nothing to you but there is one box that you will want to pay close attention to, the Core Speed box. It is this box that will show you the true speed of your processor. Its measured in Mhz rather than Ghz so you will want to move the decimal point 3 placed to the left of you want a reading in Ghz. 2931.3Mhz is 2.9313Ghz which would be commonly rounded to 2.93 Ghz.

My Overclock still does not look right

CPU-Z even reports the same stock speed as the windows system information - That's because modern processors sport a feature known as "Turbo mode". Turbo mode is essentially a feature which boosts up the frequency of a processor when the computer system needs it and only when the system needs it. This means when the PC is doing very little work the processor is either sitting at stock speed or if its a bright one, will be at an under clocked speed to save power.

Over clocking a modern processor is essentially done by "overclocking the Turbo mode". Gone are the days of a CPU sitting at 4.0GHz and drawing loads of voltage whilst you simply surf the internet. To get CPU-Z to give you the correct core speed means you need to give your gaming PC something to do, this can be done in two ways;

1 - Run everything under the sun at the same time on your PC! Whilst running, take a peek at the new Core speed. This method does have its flaws, its messy and often its actually quite hard to load a processor enough it feels that it needs the extra boost.

2 - A far a more reliable method of seeing your correct core speed is to run a stress test program for your processor. Prime 95 is the best and we actually use it to tests overclocks here. It works out prime numbers very quickly! By the time you have read this second method, it would have calculated trillions of prime numbers. You can download it here: http://www.mersenne.org/freesoft/. Simply run it, ensuring you select blend test (default) as the test type and then check your CPU-Z Core speed and you should then have the correctly displayed overclocked core speed.

Of course there are loads of other ways such as looking in the BIOS or multiplying the bus speed by the multiplyer but they are more complex methods. What you have just read is probably the simplest and easiest way to achieve knowing what frequency your processor is running at.