The store will not work correctly in the case when cookies are disabled.
***IMPORTANT BLACK FRIDAY, CHRISTMAS & COVID-19 ORDER INFORMATION***
Menu
Account
How to test your Graphics card

How to test your Graphics card

There may be a time when a game is not playing as it should do or perhaps your machine keeps crashing when asked to output something pretty. This simple guide will help you diagnose if there is actually a problem with your graphics card. Before running through this guide it is also worth considering if the issue is specific to a single game or application - if it is then it will almost certainly be an issue with said game/application rather than the graphics card itself.

The first and easiest thing to do is simply update your graphics card driver from either the Nvidia or AMD website. It’s a simple download, run and click next a couple of times so it is very easy to do. You may be required to reboot after updating the driver.

Sometimes it could be simply a faulty or buggy driver. Even the latest drivers can contain bugs so it is important to simply try another driver. You can usually only get the latest drivers from the Nvidia or AMD website however they are now making a habit of listing older legacy and beta drivers too so make this your first stop. If you cant find anything then so you will have to go elsewhere to hunt down another driver. Guru 3d (http://downloads.guru3d.com) contains a good repository of old archived drivers.

Games themselves can also be full of bugs and anomalies so it could even be the fault it within a game itself. The first benchmark to try is Furmark (http://www.ozone3d.net/benchmarks/fur). It can only be described as a giant doughnut that spins around in thin air that will stress your graphics card to the limit. Download install and run Furmark.

You will be presented with a small window with a set of settings, simply leave the settings at default but put a tick in the fullscreen tick box and check that the resolution is set to what your current environment is and then just click “burn in test”. If everything is OK the giant doughnut should appear and begin to spin and look like what the screen shots show on the Furmark website. Leave this test to run for around 15 minutes whilst keeping an eye on the temperature graph at the bottom of the screen. Temperatures should not exceed around 95°C but this is obviously dependent on what video card you have. If temperatures are high then stop the test by pressing “Esc”. Keep an eye on the doughnut itself too, if the colours don’t look right or strange things start showing up then the chances are your graphics card is showing what it known as a “artefact” shown below; 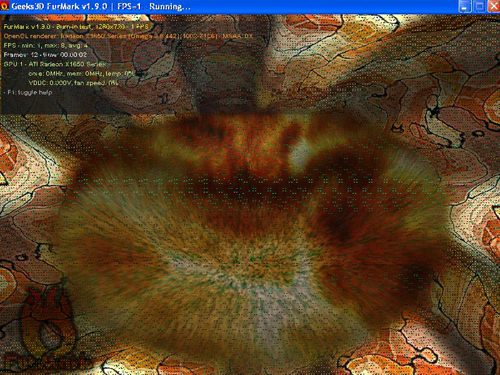 Artefacts are good indication your graphics card is failing/failed and usually means the graphics card has to be replaced. If after 15 minutes everything looks OK, then your card has passed the Furmark test, stop the test again by pressing “Esc”.

Futuremark is a company that specialises in free system benchmark tools. One of their better general tools is known as 3DMark 11 (https://benchmarks.ul.com/3dmark - Use the free Steam version). The idea is to run a series of tests, to mimic a stressful game environment. 3DMark is bug free so if this fails then there is something definitely wrong. It’s quite a big download but download, install it and run it on default settings - if you are confused you are looking for the "Run" button from the home screen or the "Time Spy benchmark". You will probably be prompted to upgrade or pay for it when you first run it so simply bypass it by clicking “upgrade later”.

Your PC will then run a series of tests to mainly test your graphics card. The whole process will take around 15 minutes and you will be presented with some visually stunning scenes where some will grind even the most powerful machines to an almost halt. The same story applies; you are looking for artefacts, strange behavior and crashes.

If the tests finish then your graphics card is most likely in good shape. You will also get, provided you are online, what is known as a 3DMark Score which is a score based on how good your machine is. If we have directed you to run this guide, make a note of the score and pass it on to us - this is one of the benchmark scores we log when we test your PC during its testing stage when we are creating the system - we can compare the score to your original score.

If you are unable to replicate the fault in any of the benchmarks or the fault still persists after changing the drivers then the fault could be software related. It could be it’s just a bug in a certain game or program or it could be something else interfering. The next best thing, whilst it is quite drastic would be to wipe your operating system and reload it which would eliminate if the problem is software related since all software will be wiped. Use this opportunity to simply just load your graphics card driver and the problem program and game. In theory, if the problem was software related then the problem will no longer appear. You can also do another run of Furmark and 3DMark to see if there is any change. Even if you got artefacts in those benchmarks its good to test again in case it was other software interfering with them.

Congratulations, you have now run all the possible simple tests you can on your graphics card and hopefully you will now have some insight as to why your custom built PC may not performing as it should be.