Service updates from UK Gaming Computers related to the COVID-19 outbreak
RTX On!

Nvidia RTX Technology is here and everyone is going nuts for it but what does it mean to you?

Ray tracing has always been considered impossible since the birth of dedicated PC graphics cards until now. It is the simulation of every light source in a game environment which in theory sounds easy but in reality the processing power to achieve such feat has never even been close as ultimately there is practically an infinite amount of light sources in any given scene. Think about reflections, shadows and light bouncing around a room - well each reflection and bounce needs to be rendered in order to look "right". In the past this has been emulated and limited to perhaps just a few sources such as a lamp, candle and the sun peering through a window, well now with RTX technology that peering sunlight can now "bounce" around a scene making lighting look considerably more realistic.

It sounds odd when written down so here is a tech demo showcasing Ray Tracing;

Ray Tracing is new and requires game Developers to include it in their titles and as of early 2019 there are only a few titles that take advantage of this amazing technology but as time moves on it will become the standard.

If Ray Tracing is difficult to get your head around then DLSS (Deep Learning Super Sampling) is even more of a mind bender! It is a technology that uses the power of deep learning and artificial intelligence to train a GPU to render sharper images. In simple terms it adds resolution and detail to a an image automatically without direct input from a developer.

Below is a good comparison image: 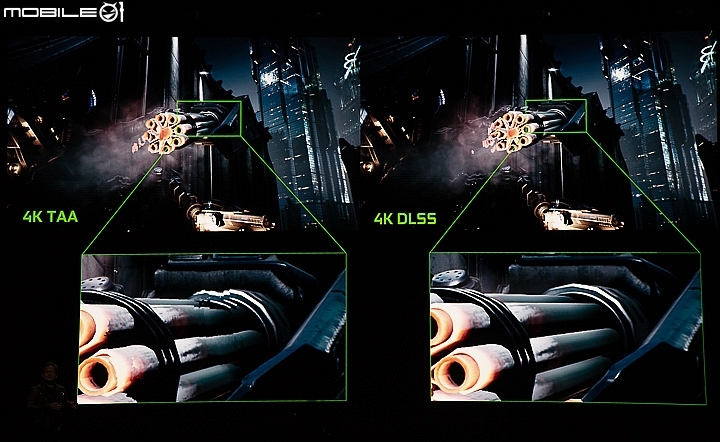 Shut up and take my money!

As you would probably expect, RTX is limited to the higher end of Nvidia's GPU line up, in fact all but the RTX 2060 6GB all RTX series cards are all more powerful than the previous 10XX generation GPU's. You can see how the RTX series (aka 20XX series) sits in comparison to the previous generation(s) and AMD's offering according to their passmark score;

The result is the new RTX cards supersede the GeForce GTX 1080 Ti, 1080, 1070 Ti and 1070. Stock of these cards has pretty much dried up so if you are considering a new high end system you should be looking for a RTX based system and not and older GTX. The exception to this rule is for the mid range line up - for the eagle eyed among you you will notice a GeForce GTX 1660 Ti, Nvidia's latest GPU. Whilst noting is confirmed it is likely Nvidia will refresh the lower end cards as time goes on taking on a similar route to the GTX 1660 Ti - New tech without the RTX technology.

Some of this may seem like a song and dance about nothing but I can personally assure you, Metro Exodus of Battlefield V at 4K with RTX on is a stunning experience although walking around looking at puddles whilst the enemy is shooting at you will not do your KD ratio any good!