The store will not work correctly in the case when cookies are disabled.
CURRENT UKGC PRODUCTION, STOCK & DELIVERY STATUS
Menu
Account
Benchmarking your PC

Here at UK Gaming Computers we often receive emails from customers concerned by the performance of their PC. This may be a fairly new system or this may be a system that has been out in the field for some time but either way the question is still the same - Is my PC running as it should be?

As PC gaming has evolved over the years, games are becoming more and more complex and as a result requires more powerful hardware to run to a good standard. The result of this amplification is bugs and performance are much more pronounced than they used to be. Once upon a time, PC gamers we simply happy a game actually ran and were able to play it through to the end without any major issues, today with all the pressures of streaming, pro scene and competitiveness and the market shifting towards the whole "frames win games" mindset, drops in game performance is now a big thing and a genuine concern.

In addition to performance demand, developers and game publishers are under more and more pressure to get games made and out the door as quickly as possible, the industry has seen unprecedented growth that has resulted in the video game industry amounting to being over four times bigger than the box office/movie industry so its in everyone's interest to get as much done as quickly and efficiently as possible to stake a claim in this massive industry.

The result is games are often rushed and game optimization wasn't what it used to be, its very common for a game to release only to be treated to multiple patches over time to improve performance and DLC's to expand on the original game. What was once true, its now exceedingly rare to see anything launched working perfectly out of the box and not have any DLC later down the line. This can lead to inconsistencies in modern game performance as quite simply they are either not finished, launched prematurely or left as it is as the developer or publisher has moved onto the next project.

Nearly all of the queries we get here are because a single or couple of games are not performing as expected or as a friend/streamer is getting better FPS. If your enquiry is because of a single games performance or perhaps a couple then the lowly performance will simply be with that/those games and not the PC itself. Its either badly optimized, had an update that's not right or simply the PC is not powerful enough to run it. If you are not sure, try some other games.

If you think the issue is multiple games then there is the perfect way to tell if there is an issue with the PC, and that's to benchmark it. A benchmark is a piece of software that will tax any PC to its absolute limits and then at the end report to you how well it performed, usually in the form of a numerical score. The beauty of a benchmark is it is considered perfectly optimized and bug free so the report you get at the end is perfect. Before UK Gaming Computers ship out one of our lovely new PC's we benchmark them here for two reasons; one to ensure the system is performing as it would be expected and secondly so we have a copy of the benchmark here so can compare it to a new benchmark report/score later down the line.

To run a benchmark you need the software, right now we are using "3DMark - Time Spy" and have been using something from 3DMark for a number of years. In the past, you used to be able to install it direct from the 3DMark website but have since moved over to Steam. Fire up Steam, search for 3DMark and you should find the product page; 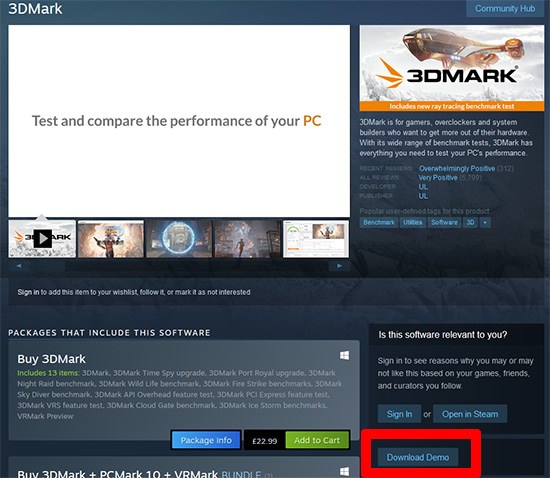 3DMark do a full version (which essentially allows you to upload your score to a leader board) and a free version. We are after the free version which should be off to the right of the product page labelled as a "Demo". Download and install it. Now close down any programs you may have running including ideally everything in the background and then run 3DMark. You should get the main page that will automatically give you the option to "run" Time Spy; 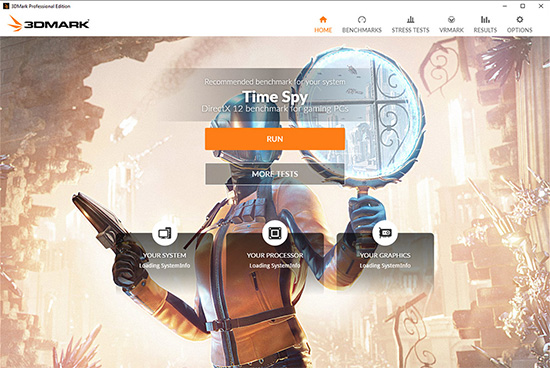 Hit run and the benchmark will begin. What you will see is a sequence that looks like a game scene, this is being rendered in real time in the same way a game is rendered only this time you have no control. It will take around 5-10 minutes depending on how powerful your system is and at the end present you with a score that looks something like this; 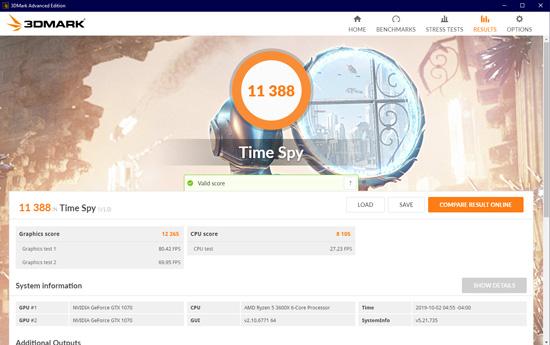 The number we are interested in is the one at the top in the orange circle, make note of it and send us it. You can also send us over the graphics score and CPU score as this will let us know how well the CPU and graphics card are performing separately, if there is a issue its likely that these two latter scores will give us an indication of where the issue is. Once we have the score(s) we can compare it to the original score(s) when we first built and tested the system, if they are similar then there is almost certainly no issue with the PC hardware and any FPS drops or performance loss will either be down to the game(s) themselves or an environmental issue (internet etc). 9 times out of 10 this score will come back as expected. Perhaps reinstalling the game, updating your drivers or simply wait until the publisher releases a patch will improve things however as far as UK Gaming Computers are concerned is the end of the road for testing the performance of the system.

If the score comes back lower than expected the to road to finding out why begins. 19 times out of 20 this will because of a software issue which may simply be a duff driver, malware/virus, something in the background (maybe hidden) or perhaps even an issue with the operating system itself. For reference, UK Gaming Computers does not support software and generally with hardware issues its quite obvious that a hardware issue is present - generally hardware either works or it doesn't or will show up strange errors when running the benchmark, there isn't really an in-between where games just run slow but by all means feel free to start uninstalling anything you have installed already to try to root out the issue.

Our advise would be reinstall the operating system from scratch - that's a full install from the USB stick/optical media that will wipe the primary drive and not a "repair", "roll back" or the built in installer from within windows. This is the only way to ensure everything including the potential culprit is removed. Once reinstalled, update windows, get your drivers back on there and then re run the benchmark. If it goes back to where it should be then you have solved the issue, if it doesn't, then come back to us where its likely it will need to be sent in to investigate further.